Long gone are the days when social media meant simply keeping up with your friend’s vacation photos and interacting with your family on Facebook. While that still happens, social media has evolved into the cornerstone of sales and digital marketing for many businesses.

And these initiatives are increasingly being fueled by influencers — i.e., people with a certain number of fans and followers that they actively engage with. This is known as influencer marketing, when that influencer’s endorsement is put to use in a content-driven marketing campaign that works across several social media platforms.

And it’s extremely effective.For every $1 spent on influencer marketing, businesses are making $5.20 in earned media value.

But bigger isn’t always better when it comes to influencer marketing. In fact, as we’ll detail below, research shows that people are more receptive to micro-influencers than they are big celebrity names. This is good news for brands looking to up their influencer game and benefit from this effective marketing tactic.

What is a Micro-influencer?

First things first — what exactly is a micro-influencer, anyway? At a basic level, an influencer has built a reputation through social media channels for their expertise on a particular topic. They use their content to entertain, inform, set trends, and promote brands’ products and services.

While celebrities like Kim Kardashian and reality stars are the most well-known, there has been a recent trend toward micro-influencers — those with between 1,000 and 100,000 followers. While they might not have millions of followers, micro-influencers often do have an extremely engaged audience, one that makes buying decisions based on the types of products or services that the influencer is using — most often on Instagram.

Why You Should Use Micro-influencers

The stats are impressive, but there are other reasons you should consider using micro-influencers for your retail business:

This means that your brand can work with multiple micro-influencers and expand your reach instead of putting all your eggs into one (expensive) influencer basket.

Markerly also notes that micro-influencers have more targeted follower bases than influencers with millions of followers, meaning you can connect to an audience that is smaller, but far more targeted and engaged.

And part of that engagement comes from authenticity. Because micro-influencers are real people, more users can relate to their content, and those influencers often take the time to post their own content, reply to comments, and behave more authentically than a social media manager for a large brand might do.

How to effectively use micro-influencers

It’s clear that using an influencer campaign can prove to be highly successful for many businesses. However, with so many influencers to choose from, it can be hard to know where to start. Below are four steps to take to optimize micro-influencers and the campaigns.

The first step is to decide what the objective of your influencer campaign will be. Is your goal to increase brand awareness? Sell a product? Reach a new market? Once you figure that out, consider how much you’re willing to budget and goals for ROI.

This is the hard part, as you don’t want to find just anyone to represent your brand. To make sure you’re getting the best ROI, start by searching for influencers who cover topics as closely related to your products and services as possible, then expand your search out from there.

You want to ensure they have high engagement rates, but also check to make sure their audience is a good fit for your promotions. Fortunately, there are some tools you can use to start your outreach, including Influence.co, HYPR, and BuzzSumo.

One of the most popular ways to leverage a group of influencers is to reach out and offer to send them free products in exchange for honest reviews to their audience (and keeping in mind that by law, they have to disclose that they got the product for free.) People trust them, so they will most likely also trust the products that the influencer recommends.

But before deciding to sponsor a micro-influencer, take a look at sponsored content they’ve done in the past. Was it fair? Did the audience have a positive reaction? If it feels like a good fit, this can be a very effective practice.

As the name implies, this is when influencers create user-generated content for your brand. This can include:

The point is to create meaningful connections with your influencers and use them to position your brand in a positive light. It can pay off, as 93 percent of consumers find user-generated content to be helpful when making a purchasing decision.

Now that you know how effective micro-influencers can be — and how to go about using them — it’s time to look at those brands that are doing it successfully.

One look at this company’s Instagram page and you’ll notice they effectively tap into smaller, more targeted networks of micro-influencers to share product awareness posts on Instagram using the hashtag, #LiveLaCroix.

The company deliberately looks for profiles with lower follower counts to keep their social media presence authentic, relatable, and fun, reaching out to them with product vouchers or other offers to post pictures with the sparkling water. This ensures their product is seen by similar users — and their target audience.

It might seem like using micro-influencers is a recent phenomenon, but software giant Adobe has been using this method for years. In 2012-13 they were promoting their editing software Photoshop Elements, and reached out to lifestyle bloggers to promote the product on various social media channels. Over several months, these ambassadors shared photos they edited with the product and also blogged about the software and how to use it.

Tom’s of Maine finds micro-influencers in its existing customer base.

Natural health brand Tom’s of Main didn’t really have the budget for big-name influencers, so they went the other way — turning existing fans of the product into customer advocates. They created a network of micro-influencers with between 500 to 5,000 engaged followers that participate in branded activities that help drive brand awareness. They were incentivized with free products, special discounts, and early access to information like new products and discounts.

The result? In the first quarter of their amplified use of micro-influencers, Tom’s of Maine’s social media channels generated 16.6k likes, comments and shares from 2,556 posts, ultimately reaching 4.4 million people. Not only that, but they also gained almost 11,000 email addresses and survey responses — invaluable information that will be used to guide future product strategies and audience targeting.

It’s a safe assumption that given the fact that consumers spend more than half the day on some sort of social media, influencers aren’t going anywhere in the near future. In fact, influencers — specifically micro-influencers — will be even more valuable as people are looking for personalities they can relate to and trust, not necessarily a celebrity.

Retailers that embrace influencer marketing will be one step ahead of the game. 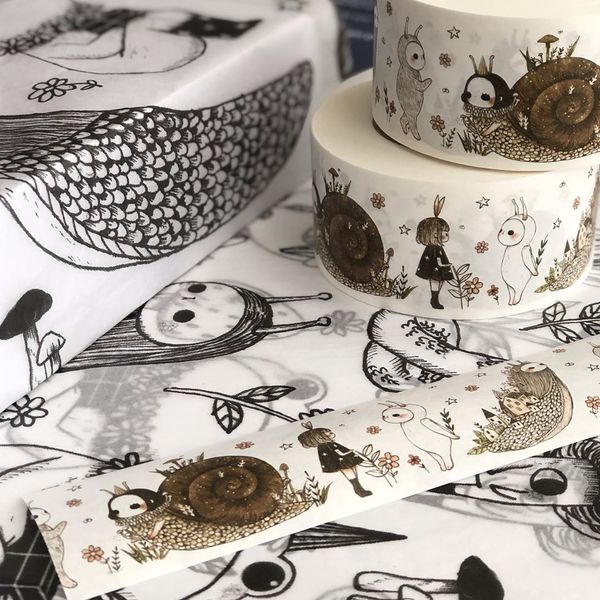 @jb0xtchi's character illustrations on noissue tissue and  paper tape brings a fanciful realm to life. 💫✨ The color choices are perfect for letting the characters shine 🤩🤩 Head to our website to

Amazing customer service - Anna and the team answered by questions quickly (even in the middle of the night!). Amazing work, team! Would definitely use again.